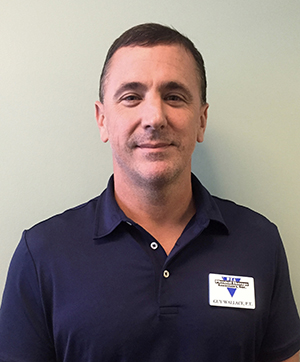 He also made the Dean’s List every semester for four years while on scholarship. He then went on to earn a degree in Physical Therapy in 1995, also from the University of Louisville.

After graduation Guy completed his clinical training with the Jacksonville Jaguars and at Ashland Kings Daughters Hospital. He then moved back to Elizabethtown to work at Hardin Memorial Hospital for five years. In 1999 Guy opened up Physical Therapy Associates, Inc. (PTA) in Elizabethtown where he specializes in outpatient therapy. His special interests are in low back, knee, neck, and shoulder pain.

He is a member of the KPTA and the APTA. He is also in the process of becoming orthopedic certified specialist. Guy lives in Elizabethtown with his wife Brooke and their daughters Langley, Campbell, Malone, and sons Jagger and Canton.